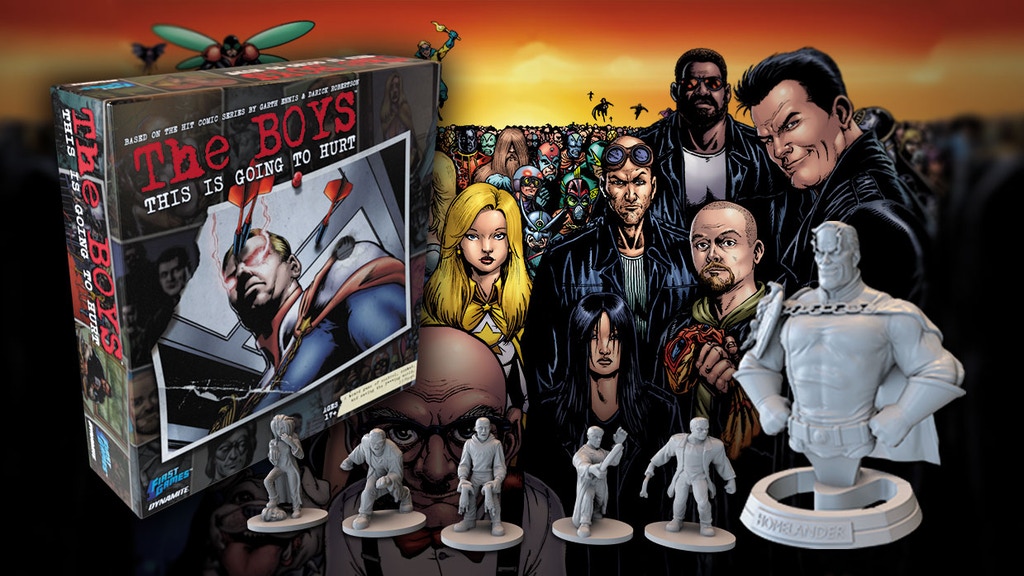 THE BOYS: This Is Going To Hurt The Board Game

THE BOYS: This Is Going To Hurt is a tabletop board game based on the hit-series THE BOYS from Dynamite Entertainment.

Latest Updates from Our Project:


We've got an exciting update for you today!


First: production remains on schedule and all files have been prepped for our printer!


The rules layout is complete and a new version of the rulebook has now been uploaded to the Tabletop Simulator! If you'd like to play the game, you can do so here:

If you don't have time to run through the game but would like to read the rulebook, we've got you covered!

Lastly, the pledge manager is now fully open and you are free to lock in your order or purchase add-ons.

We remain on-schedule for this project and will continue to update you on production as it happens!

Thank you all, and have fun with the TTS!


Since the campaign closed we've been hard at work delivering on everything we promised during our stellar campaign! The rules are locked, the components are finalized, and we're working with our printer to get the files correctly laid out and into production!


Speaking of finalized, Lamplighter is officially finished and ready for gameplay!

For those of you who have tried the game digitally, we will be adjusting the TTS mod with the new rules and we'll let you know when you can test them out for yourselves!


What is a Smoke Test?


A smoke test sends surveys to 5% of backers from each pledge level in your campaign.

It’s a simple way to catch any errors and make sure everything runs smoothly.


So look for that soon, and if you see backers in the comment section talking about the survey, do not worry, yours is coming soon!


Thank you all for your support. We're happy to report that the game has only gotten stronger post-campaign and we'll be back soon to give you an opportunity to see that for yourselves!


It's done! The campaign has come to a finish and we could not be more excited! Thanks to some outside funding we have raised more than $100,000 for the campaign and are officially adding the paintable Terror and Lamplighter miniatures to all deluxe tier and above pledges. What an amazing way to kick off the Christmas weekend!


Thanks to all of your support, we couldn’t have done this with you!

During this campaign we've unlocked:


All of that is thanks to your continued support. We're so grateful to have you on board and we hope you all have a wonderful holiday.


Well, now that the party's over, it's time to get to work.


We're currently finalizing testing for the modes and abilities added during this campaign, if you'd like to join us on Tabletop Simulator and add your input, we'd love to schedule a time for you to play with us!


Once that's done the files will go to the printer and we'll move to sample and prep as fast as possible!


The pledge manager will be up soon, so expect updates from us on when you can access your pledge and load up your shopping cart!

Now that all the miniatures from the campaign are unlocked you can reserve an additional set of all 10 for $25.


Any retailers or distributors interested in securing copies of the game, sets of miniatures or any other merchandise can contact us at JoshuaStilts@theboysboardgame.com for details and pricing.


Thank you, one and all, we'll be in touch soon!


We've added another paintable miniature to your deluxe game!

Payback’s leader is here to help you save humanity against HOMELANDER!

This means the deluxe game now comes with EIGHT playable characters, each with their own asymmetric power set.


But that's not all!


The playable characters available to backers goes up to TEN soon!

Lamplighter has officially won the fan poll and will be added to deluxe copies of the game along with Terror when we clear our last stretch goal!

And lest we forget, this campaign features more exclusives than just game content! This exclusive variant cover of THE BOYS: DEAR BECKY series is available as an add-on for $30. Edit your pledge to add $30 and you'll be able to add the trade to your pledge in our pledge manager!